Inspired by Elisabeth, I joined Daily Challenge. I think it will be good to help me get healthier all around. You do (shockingly) different challenges every day ranging from mental health and emotional well-being to physical health and eating better and way, way more.

If you’re on there, look me up! We can encourage each other and help each other reach our goals. Nice, right?

Can anyone help her out?

Taking a forced vacation from methotrexate due to a drug shortage led me to some interesting discoveries. The first few weeks off the drug, I felt great. Amazing, even. I was less tired; I had more energy; I got fewer headaches. But that didn’t last.

Enter phase two: what I like to call the “remembering why I was on MTX in the first place” phase. I hurt more, so I was exhausted all the time and short-tempered. My psoriasis came back on my scalp. My PsA was definitely much less well controlled—which is funny, because I didn’t think it was doing all that well even on the MTX.

But my awesome NP found a pharmacy that had a supply of the stuff coming in, so she sent in a scrip for me. It has the preservative, which is different but not bad. I took it for the first time in a long time last night, and I feel downright horrible today: nauseated, delightful headache, hot flashes—the whole nine yards. I don’t know if it’s a reaction to the preservative or just to getting back on my favourite highly toxic drug, but there it is. (And it’s not from mixing alcohol and MTX; I was DD for yesterday’s Super Bowl festivities, so I didn’t touch even a drop.)

When I first found out about the drug shortage, it seemed a little like Providence: Maybe this was a sign that I could get off one of the three main drugs I’m taking (which are MTX, Plaquenil and Enbrel) and still be OK. Maybe I can reduce my drug load a bit and still feel the same as I do on them. That turned out not to be the case. And while that definitely bums me out some, I’m glad that I can feel something close to normal even if it takes two injections and 42 pills per week to get there.

I don’t know how many of you are into George Martin, but if you are, enjoy:

Can’t wait for the next season of Game of Thrones…

Image by tomswift46 (No Groups with Comments, no graphics,f via Flickr

This press release just came across my email (and props to the NPF for sending out press releases that are actually awesome; it makes my little journalist’s heart so happy.)

PORTLAND, Ore. (January 25, 2012)—To assist the millions of Americans living with psoriasis, the most common autoimmune disease in the country, the National Psoriasis Foundation published the most recent guidelines in the United States for the management of plaque psoriasis—the most prevalent form of the disease, affecting roughly 80 percent of people with psoriasis.

The consensus guidelines from the National Psoriasis Foundation Medical Board, adapted from the Canadian Guidelines for the Management of Plaque Psoriasis to reflect U.S. practice patterns, aim to clarify when to use oral and biologic medications for people whose psoriasis is beyond topical treatment. A table summarizing the latest research and thinking on eight drugs provides data on when and how to best use them in a way that has not been done before.

“It’s a bold table in that it says directly which treatment will work or which has little evidence to support it,” said Dr. Sylvia Hsu, a member of the Psoriasis Foundation Medical Board. “It spells out clearly in one or two sentences which method is safer than we previously thought.”

One example is the recommendation that cyclosporine, an immunosuppressant drug taken orally, may be used as a short-term solution for up to 12 weeks, although FDA guidelines allow its use for up to 12 months.

The new guidelines also state that ustekinumab, commonly known as Stelara, is safe and effective as a first-line therapy. Previously, its use has been limited to second- and third-line treatment.

To view the guidelines and table, visit www.psoriasis.org/new-treatment-guidelines.

Psoriasis is the most prevalent autoimmune disease in the country, affecting as many as 7.5 million Americans. Appearing on the skin most often as red scaly patches that itch and bleed, psoriasis is chronic, painful, disfiguring and disabling. Up to 30 percent of people with psoriasis develop psoriatic arthritis, a related joint disease. There is no cure for psoriasis.

Enbrel and I have a complicated relationship.

Without he extraordinarily expensive biologic, I barely function. Its beneficial effects are somewhat diminished due to the ongoing methotrexate shortage, but even so I’m doing better on it than I would off it.

Still, I really hate taking the shots. I mean really hate it. I put it off on Sundays as long as I possibly can because, well, it hurts. And I don’t like hurting myself on purpose.

But I have a system. 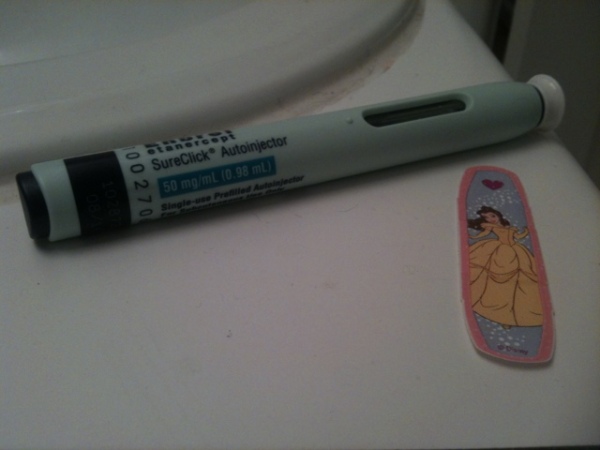 And that system includes spades on my iPhone and, at least for now, Disney princesses. Belle is my favourite, of course.

Anyone else have any tips for making the medicine go down more smoothly?

I recently discovered a relatively new psoriasis blog, “Me With Psoriasis.” The author was recently diagnosed with psoriasis and keratitis and is super open about the impacts on her. It’s a great read, and I’ve definitely added it to my blog list. Enjoy! I’ve never really been one for New Year’s resolutions. I get the appeal, but it’s never been something that’s really worked for me. Still, this year, I decided to give it a go and wrote a 12 in 2012 list.

What resolutions did you make—if any?

Ah, yes, the staple of blogs, newspapers and radio shows everywhere: the year in review post/article/show.

2011 was a pretty good year for me, overall, so it’s good to look back at where I was then before considering how I want to make 2012 even better.

I had just restarted Enbrel and was starting to feel better after the horrible slow decline of 2010. I got a promotion at my job (wahoo!), and my new reporter started. I was feeling pretty optimistic that things would be awesome.

I fought the winter blahs and got an IUD. I got mad at people’s assumptions. I fell back in love with journalism, despite its potentially negative impacts on my health.

I went ice skating—and learned to accept my limitations.

I started the Health Activist Writers Month Challenge. I participated in the Walk to Cure Psoriasis. I was named a top 40 arthritis blog!

I was incredibly busy with work, as summer events started rolling in and school events kicked into high gear before the end of the year. The mister and I painted our living room a lovely, bright blue.

I traveled up to Washington, D.C., to visit friends and—best of all—present in and soak up the National Psoriasis Foundation’s volunteer conference! The mister and I celebrated three years of marriage. I set up a Facebook page for the blog.

I had a bit of a nasty flare. I sewed my first garment. I turned 27.

I got sucked in to Dragon Age: Origins (for the first time, anyway). I felt pretty (when they turned out the lights).

I looked back on seven years with psoriatic arthritis. I posted my measurements for World Arthritis Day. Halloween! Real Thanksgiving! The mister and I visited my folks at their new home for the first time.

I wrote a letter to my 18-year-old self. I started and didn’t finish National Health Blog Posting Month. I cooked my first vegan Thanksgiving.

I worked an insane amount of hours, dropped off the face of the earth blog-wise, celebrated Christmas, joined the Christmas choir at my church, drove up to visit my parents and so much more. It was an action-packed month.